"Just when you think you have everything under control, the Dakar surprises you." This is how Filipe Ferrao, mechanic in the X-raid team, describes the spirit of this unique race. A 9,000 km route in three countries. Almost two weeks on the road, six days of which are at an altitude of over 3,000 m. An incredible challenge for drivers, vehicles – and all those working hard behind the scenes to make the Rally a success.

On 2 January 2017, 318 vehicles set off from Asunción (Paraguay) on the great Dakar Rally, with 220 reaching their destination Buenos Aires (Argentina) 12 stages later. The challenge of navigating a vast route in difficult terrain within a short space of time ought to be just as great today as it was in the early years of the race. But a lot has changed behind the scenes: today there are countless helpers at work making sure that everything runs as smoothly as possible.

In 2017, there were 60 medical personnel, for example, who took care of the drivers' health, while 22,000 police officers ensured the safety of the event. The kitchen service, cleaning personnel and set-up teams worked hard to ensure that there was a bivouac ready and waiting at the end of each stage – including a canteen tent serving from 4.30am until late at night. In addition to the organisers, who took care of procedures at the bivouacs, the teams' own mechanics and technicians were a major source of support for the drivers. They were not following them directly on the race track, however, but on asphalt roads. This meant that their work did not begin until the end of a stage, when they would check the rally vehicles over. And Kärcher was also on the road with Dakar, with a Cleaning Centre and mobile cleaning trio.

Cleaning in the middle of nowhere

All of the drivers have benefited from the cleaning specialist's sponsorship of the Rally since 2012. Like every year, a large Cleaning Centre was also set up in 2017 at the end of the eighth stage in Salta. "It must work completely autonomously, without power or water connection," explains Ivan Villamil from Kärcher South America. "A great deal of organisation and logistics goes into that. Including transport, it takes our technicians and industrial construction specialists five days to get everything ready for the big event."

One technician per motorcycle or car and two per truck worked for nine hours non-stop. "In the best year, we managed 2,500 vehicles in two days – then there were considerably more participants, and some even brought their vehicle twice." No wonder that after such a white-knuckle ride sleep was the order of the day. "But the rest does not last long – the bivouacs are dismantled again the next day. That means getting up early and dismantling and loading everything to be ready to leave at midday." 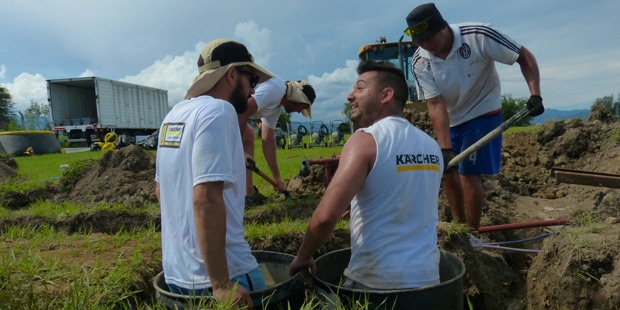 Kärcher on the road

With Desafío Kärcher, the two teams sponsored by Kärcher, X-raid and KTM, received an additional service along the way: the three adventurers from Kärcher Argentina set off with a pickup and a high-pressure cleaner to set up a mobile cleaning station at each daily destination.

"Most of the time we had mountain air, rain and mud to contend with," explains Juan José Pisacane, Sales Manager Professional at Kärcher Argentina. "But at the beginning in Resistencia, we discovered what it means to work at 55°C. Not even the accreditation stickers wanted to stay on our pickup."
The Desafío trio were at the bivouac before the drivers at every stage, figuring out in the organised chaos where they should position themselves, and organising the required water. In most cases, the respective city provided a tank, in other places the fire service offered assistance. 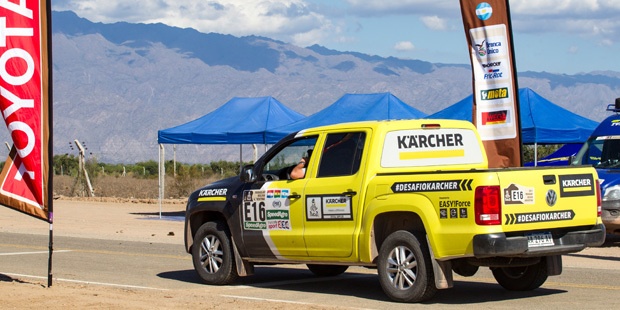 Cleaning itself was carried out by the teams' mechanics. "Bonnet up, clean the engine compartment, filter and radiator, check parts exposed to high stress or those with limited mileage – and despite the time pressure, not miss any details," says Filipe Ferrao from X-raid, describing the work they do. Pro MINI John Cooper Works were due for cleaning and maintenance in around three hours, unless more serious problems arose on account of technical difficulties. The mechanics were indeed grateful for the high-pressure cleaner when carrying out their work, because: "It is more pleasant not to have to wade through the mud – and of course you can also see more."

And so the challenge was to deliver top performance under the toughest conditions every single day. "You eat when there is something to eat and you sleep when it is convenient to do so. Otherwise you work – that is Dakar mode," explains Ferrao. Since sleep was in short supply, any available space was used, whether in the tent, the roof tent on the truck, or on the camp bed under the truck's side skirt. Ferrao sums up: "This year the rain and cold really took it out of us – but of course we will see each other again in 2018." 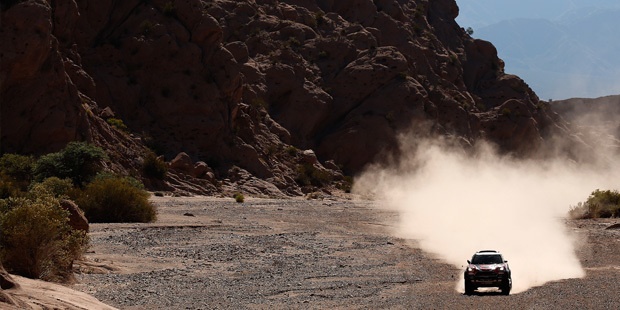 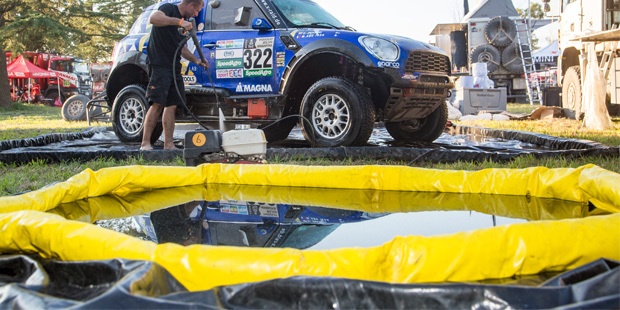 From odyssey to Dakar

The fascinating origins of the Dakar Rally go back to the 1970s. In 1977, the Frenchman Thierry Sabine lost his way in the Libyan desert during the Abidjan-Nice Rally. Inspired by this serious experience, he founded the Dakar Rally in 1979. Four years later, the myth was finally established when more than 40 drivers got lost in a sandstorm in the Ténéré desert (southern Sahara), some of them taking four whole days to get back onto the route. Ever since, the Dakar has been regarded as the most famous long-distance desert rally in the world. For those who embark on this adventure, Sabine's words are sure to be as true now as they ever were: "A challenge for those who go. A dream for those who stay behind."

Owing to the scarcity of water, there was a particular emphasis on low consumption of this precious natural resource. The mobile team, as well as the Cleaning Centre, collected the waste water, processed it and reused it. The team also sent the water required for cleaning in the Cleaning Centre to a certified partner at the end of the project, who fed it back into the drinking water system following reprocessing.