Facts and figures for the 2016 financial year

Besides economic growth, 2016 was completely characterized by product innovation: Kärcher launched more than 100 new products last year. In the industrial sector, the EASY!Force trigger gun was introduced. It reduces operator fatigue by using its own recoil force to hold the trigger down for you. On the retail side, Kärcher has launched a new pressure washer line, as well as a completely new floor cleaner, the FC 5, which unites vacuuming and wiping in just one working step.

Also in 2016, the global market leader in cleaning technology made extensive investments. A new customer and visitor center was opened at the headquarters in Winnenden, Germany.

Kärcher also further extended its social commitment worldwide. This includes restoring historical monuments just as well as supporting non-profit organizations. In 2016, Kärcher cleaned the Hermann Monument near Detmold and the Ericsson Globe in Stockholm, the largest spherical building of the world, using its own technology in the context of its culture sponsoring. In the social sector, Kärcher supported SOS Children’s Villages in Germany and abroad with devices and donations. Together with the Global Nature Fund, green filter systems were constructed in Mexico and Colombia for rural communities.

In 1962, Kärcher founded its first foreign subsidiary in France, followed by Austria and Switzerland. Internationalisation continued apace. In 1975, Kärcher opened a factory in Brazil; 10 years later, the company had founded 16 sales companies in North America, Africa, Australia and elsewhere. By 2012, Kärcher was represented by subsidiaries in 57 countries and generating 85% of its sales abroad. With 40,000 customer service points in over 190 countries, Kärcher provides comprehensive support to its customers all over the world.

In 1986, Kärcher launched its pioneering roller brush technology for scrubber driers in the professional range. Thanks to the development of a new rotary nozzle (dirt blaster) in 1995, the cleaning effect of the high-pressure cleaner was almost doubled. The dust intake of commercial wet and dry vacuum cleaners was continuously improved, and in 2007 the innovative TACT filter cleaning system was launched. New procedures were also developed in the course of worldwide cleaning projects: the 284 travertine columns on St Peter's Square in Rome were restored using a specially developed spray process over a total area of 25,000 m². Since 2009, Kärcher has been selling ultra-high pressure cleaners, which, at up to 2,500 bar pressure, not only clean but restore facades and strip concrete. In the same year, a multipurpose municipal sweeper was released onto the market and new target groups were gained with the launch of water dispensers. 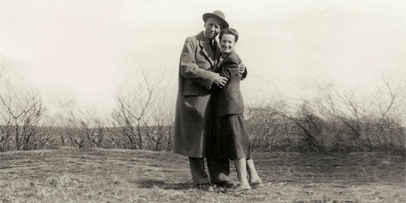 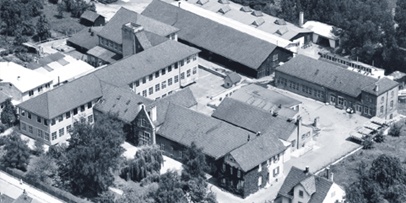 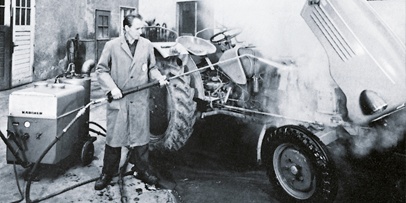 On 27/03/2015, Alfred Kärcher's 114th birthday, a commemorative plaque was erected at 57 Nauheimer Straße in Bad Canstatt, Stuttgart, in honour of the Swabian designer. The new plaque is the 101st of its kind and is a worthy addition to the many other points of historical significance in the oldest and most densely populated district of Stuttgart.

It was erected by the registered association Pro Alt Cannstatt e.V., which has been committed to preserving the Cannstatt district with its rich history since the beginning of the 1980s. The association created the "historic path", a route which encompasses all the cultural highlights of Cannstatt and has now been expanded to include the former residence of the Kärcher family.

Not far from the spa park, in Nauheimer Straße (known as Olgastraße until 1938), the 33 year-old Alfred establishes the "Alfred Kärcher Limited Partnership" together with his father. Further business premises, assembly and production sites could also be found in Bad Cannstatt, at 30 Haldenstraße and 71 Kreuznacher Straße.

Thus lived and worked Alfred Kärcher for many years in the streets of Bad Cannstatt, before in 1939 a shortage of space saw him move to the company premises he had acquired in Winnenden two years previously. The site in Winnenden remains the head office of the family business to this day. 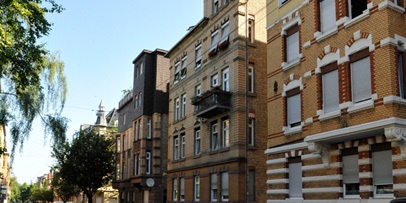 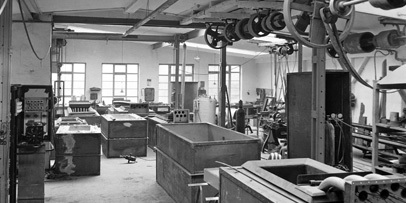 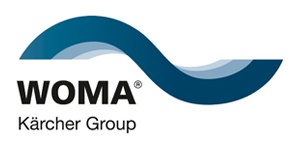 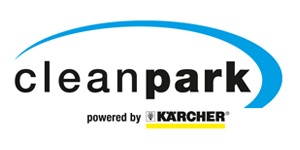 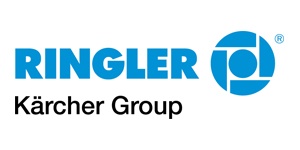