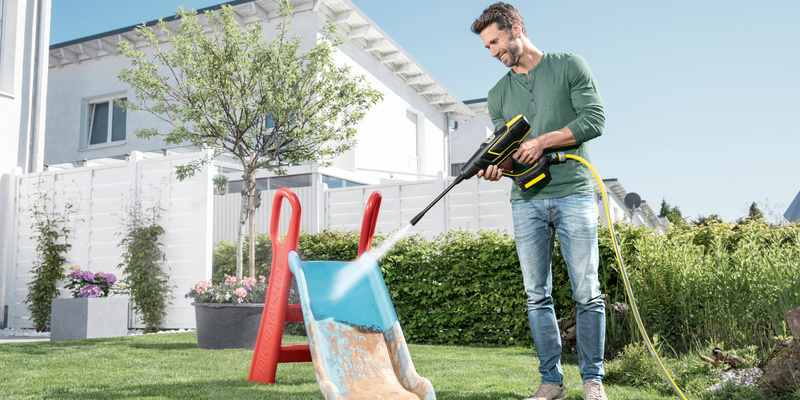 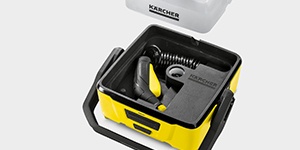 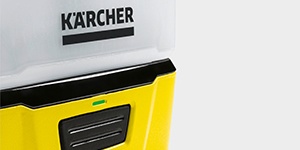 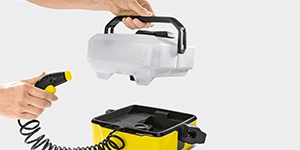 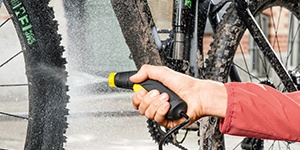 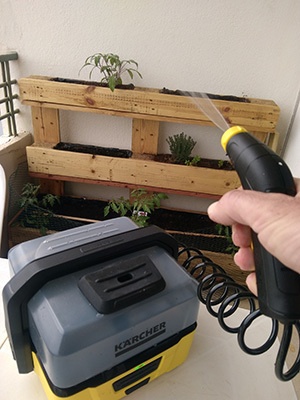 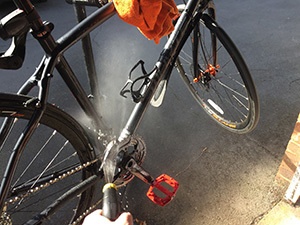 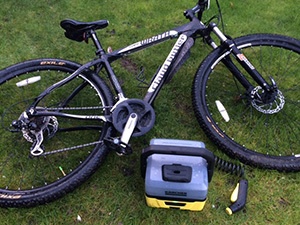 It’s tiny, YES TINY! I had seen it in the flesh before, but perhaps had forgotten how compact the product is. Designed to be portable it will be easily store in the boot of the car/truck/van.

1ST USE:
Any excuse to get out for a ride! After an hour of riding in the nearby muddy woods we quickly put the tester to good use. The 4L tank lasted the wash, but only just! You definitely have to get right in and up close to get the dirt & mud off, but it does work! I would have preferred another litre in the tank to get the job done.

2ND USE:
The sun is shining and spring is upon us, so I wanted to clean up my daughters garden house which has gathered some dirt and cobwebs over the winter. I think that if I was using a normal pressure washer I would risk taking the protective paint off, so this little portable system is perfect for the job! It got rid of the cobwebs and some of the dirt without too much effort, and beat having to get a rush and/or cloth out to do the job. In under two minutes I managed to clear all the cobwebs from the areas I wanted to and its left the house looking a bit nicer for the summer!

Next was my daughters toy pram wheels which we’re clean in seconds.

Now to find something else to clean! 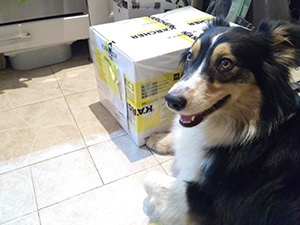 On with the day!

My dog was terrified of the sound of the cleaner as soon as I tried using it to wash his paws. With some praise – and a few treats – I managed to convince my dog that there was no reason to be scared; by our third walk, washing him using the cleaner was a lot easier. As well as my dog, I have another passion – cycling. The majority of my training, road races and mountain biking takes place in pretty wet weather, so I'm constantly needing to clean my bikes. Using a high-pressure cleaner, the water gets into most of the bearings, which turns the task from cleaning the bike to completely reconditioning it. The alternative – a bucket of water and a scrubbing brush – takes forever and leaves a lot of dirt behind in hard-to-reach areas. This is why I had a lot of hope for the Kärcher To Go. And it didn't let me down! I sprayed the bike down with water, brushed it a little and rinsed it off – it was as easy as that! Cleaning a bike and its tyres took less than two tanks of water (a maximum of eight litres), which is great! You could clean at least four bikes without having to recharge the battery. Although that doesn't seem to be the limit – even after using more than 30 litres of water, the cleaner's battery still wasn't empty. I would like to note that you can fill it with warm water, which is nicer and more convenient in cold weather. I'm very happy – I've used the cleaner every day for the last three days. It's clear to me that the developers really thought through the design. It would be difficult for me to think of anything to add in further development and to find a good reason for it. My main request for further development would be to expand the range of accessories. 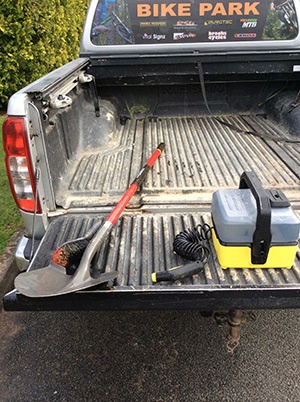 The unpacking was straight forward and the OC3 was easy to set up and ready to use . Compact in size, worth mentioning that I love the square shape as itâ€™s easy to stow and not at all easy to tip over when in transport. Once the spray nozzle has been removed from under the tank and the tank filled it was time to test. I thought it was a bit lacking in power to start with but the fan nozzle can concentrate the blast to remove some fairly stubborn muck.

Ok onto the testing , which was a bit hurried due to only being received 2 days ago, I took it out to work where I used it to clean the shovels from the weekends dig day and also to clean the cement mixer , both it managed with ease. The spay gun is great to use and being small and agile it gets into the mixer and is able to clean all around the blades.

We tested it head to head against a Mobi 12v pressure washer.

Kaercher pro: ready to use straight away , not restricted where to use , Cons . Small tank, needed to fill 3 times against the mobi. .

Both machines cleaned the bikes after a while which is better than using a mains powered pressure washer as these can cause damage to the suspension seals and the sealed bearings.

The testing continues but as a whole the OC3 is a neat machine so weâ€™re. Taking it. With us to Portugal where weâ€™re racing in Lousa to see how it copes washing the 9 bikes we have out there ! 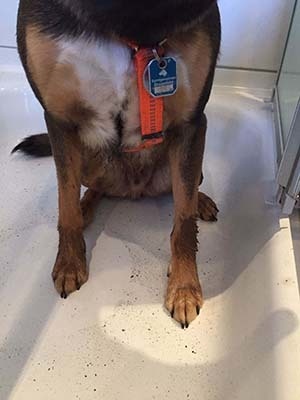 The first test on a bike. I must admit, I've not cleaned my bike in at least a year – I think that's probably clear from my photos. The mud and dirt on my bike were therefore dried and stuck to it. I had quite low expectations when I started to clean my bike, but I was surprised by how much power the small Kärcher provided. It got rid of all the dirt, defying my expectations. I didn't even need a brush. You can really see the results. I'm really pleased with what this small device can do. Especially if you're out and about with your bike, for a race or something similar, for example, it would be really practical to be able to clean the tyres straight away before heading home. Of course, the dirt comes off even more easily when it's fresh. I'd say it's an absolute must-have for any cyclist. While cleaning my bikes I also noticed that the four-litre water tank was more than enough for one bike. If you want to clean two bikes, though, a replacement tank or a six-litre tank would be practical. Which leads me to my suggestion – increasing the capacity to six litres. This would improve the cleaning performance but the device would still remain a portable size. A shoulder strap would also be handy. The hose isn't long enough to clean larger objects. If you could hang the Kärcher over your shoulders, you'd always have both hands free for working. ...

After that, it was time for our dog to meet the Kärcher. He doesn't like getting wet outdoors though, so we used the device indoors, in the shower. As my photos show, it worked well indoors, too. I noticed here that a pressure regulation option with two pressure settings would have been convenient and made things a bit easier. It would make it possible to use the pressure in a more targeted manner. A level switch on the trigger would be a possible solution. If you pressed the handle halfway down, you'd get a lower pressure than if you pressed it all the way down. I found the standard nozzle impractical for washing pets. Most of the water stream missed the dog's paws completely. The cone spray nozzle from the accessories set was a real help for this task.... 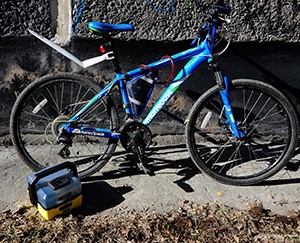 Today I successfully tested the device on my bike. My poor bike was covered in residual dirt – some even from last year's cycling season – and all the new dirt it had collected during use on the streets which have been thawing in springtime. Soil in the tyre treads, dried dirt on the frame and pinion – you'd have your hands full trying to clean it all yourself.
First and foremost, I want to say that this cleaner is perfect for people living in multi-family houses in large cities! Until recently, I could only dream of being able to clean my bike: My bathtub isn't big enough, running a hose all the way from the ninth floor to the street is impossible, and as for trying to clean all the parts by pouring water out of a bottle and wiping them using a wet cloth – the results wouldn't be worth the hassle.

IN SUMMARY:
The cleaner is ideal for quickly cleaning bikes with an average level of dirt. I worry that it would not be possible to completely clean a dirty bike after cycling in bad weather without using any special attachments.

BONUS:
I used the rest of the water to clean my hiking boots. The cleaner managed this task in just a few seconds – it was easy and gentle and I discovered a new way to use the cleaner. 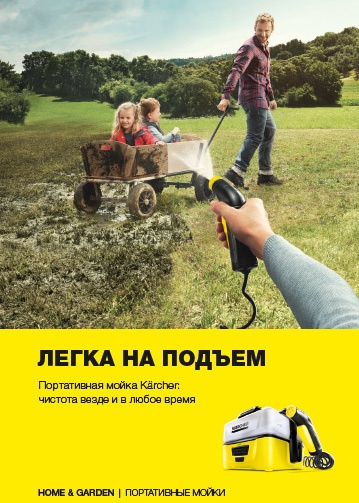