Up to 100 years of old dirt was gently removed from Germany's second highest monument within the scope of the Kärcher cultural sponsorship. 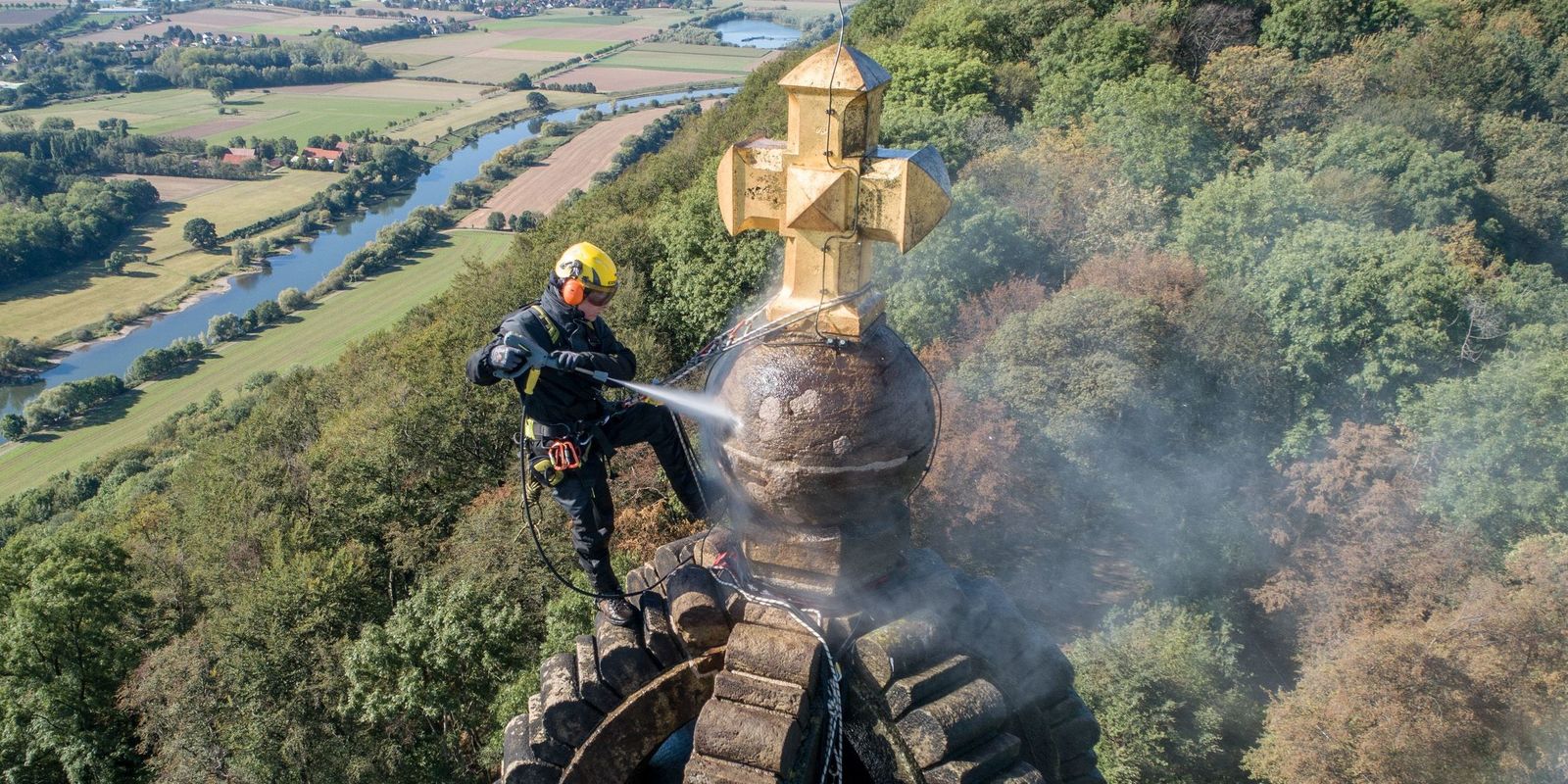 Organic impurities of up to 100 years were gently removed from the base and the canopy using hot water high-pressure cleaners. 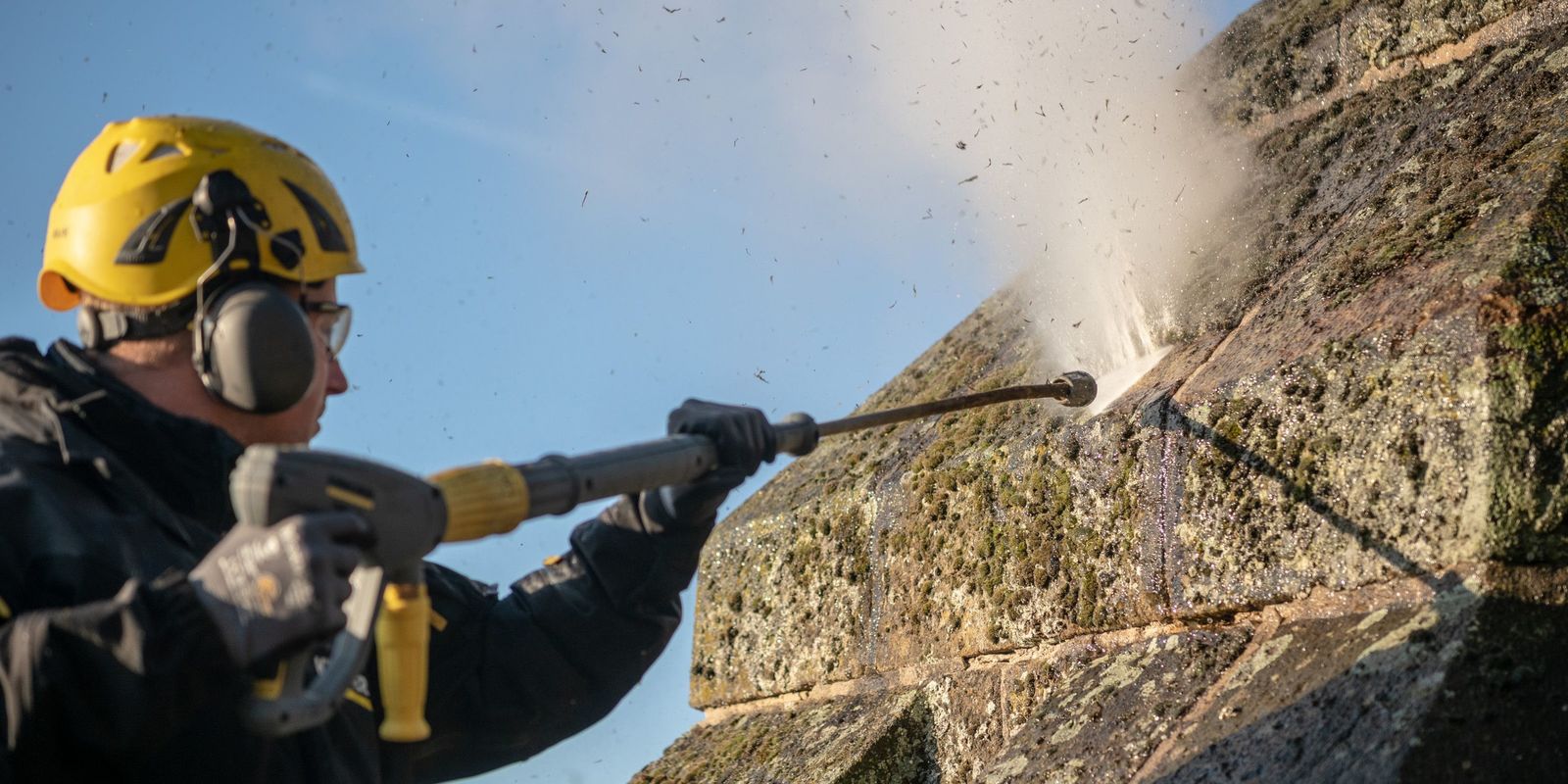 Reduced surface pressure of 1 - 1.5 bar and a temperature of approx. 90 °C enable the gentle removal of moss and lichens without high pressure and the use of chemicals. 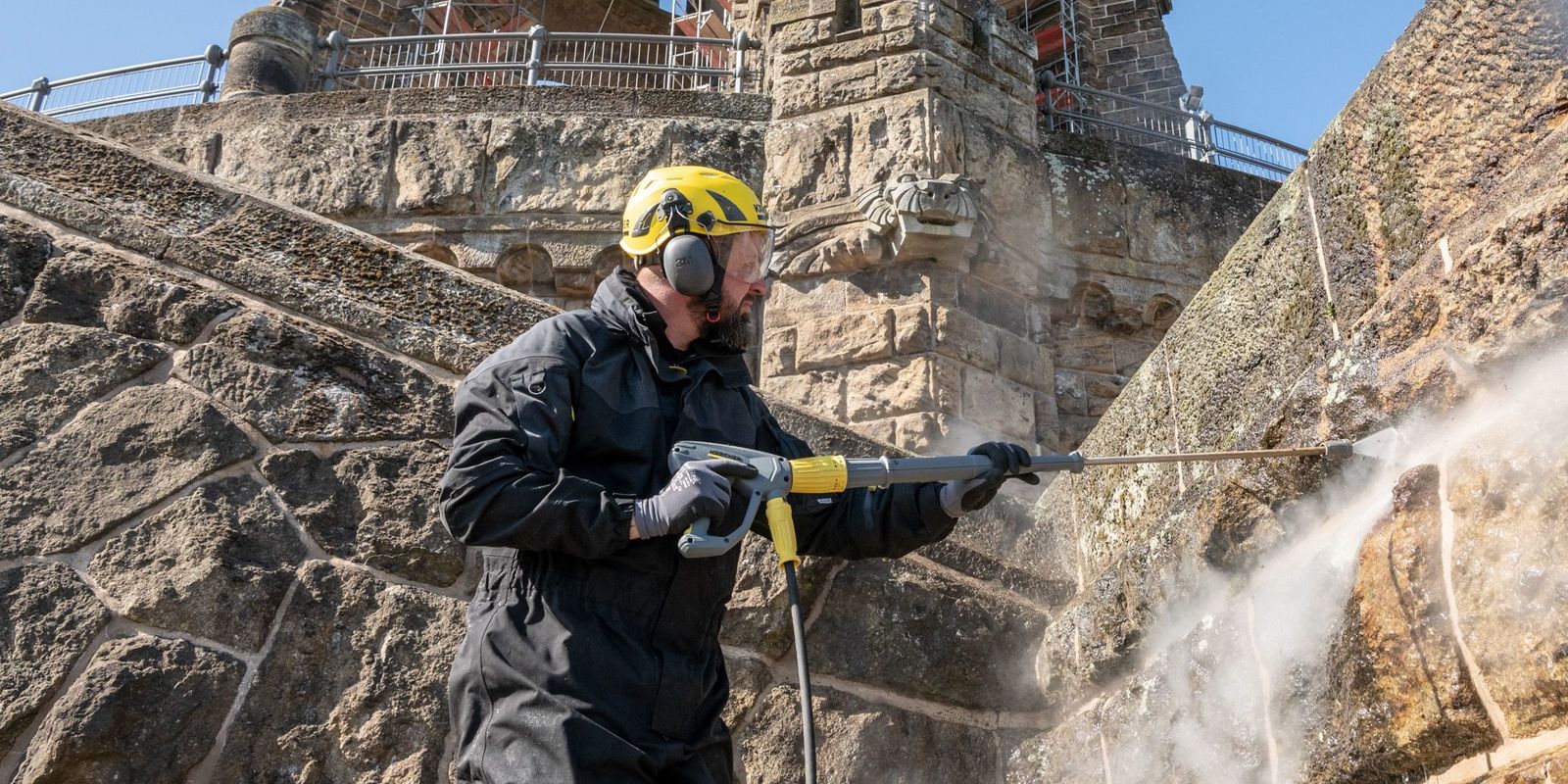 Limescale was removed from the sandstone surface of the base using low-pressure micro-particle blasting technology and a fine aluminium silicate (40-90 μm) as blasting abrasive.

Up to 100 years of old dirt settled on Germany's second highest monument, the Emperor William monument in Porta Westfalica. Together with industrial climbers, Kärcher removed these deposits in a gentle manner. The experts abseiled from the dome of the canopy to carry out the work. The spectacular rope access technology was already used for cleaning the sculptures of the faces of U.S. Presidents on Mount Rushmore in the USA and in the Ulm Minster Lutheran church. Further cleaning work at the base and inside the dome is carried out from either a cherry picker or scaffolding. The cleaning was performed within the frame of maintenance measures, in which the dome was repointed from the outside and cracks were filled inside the canopy.

So that nothing is taken from the original character of the monument by the cleaning, particularly gentle cleaning techniques were chosen in close coordination with the LWL Office of Historical Monuments and the monument owner, the Westphalian-Lippe Asset Management Company (WLV).

Organic impurities were removed from the base and the canopy using hot water high-pressure cleaners with reduced surface pressure of 1 - 1.5 bar and at a temperature of approx. 90 °C. This type of cleaning enables the removal of moss and lichens without high pressure and the use of chemicals. It also delays the growth of new vegetation on the monument made from Porta sandstone, as deeper spores are eliminated by the high temperature. Limescale was removed from the sandstone surface of the base using low-pressure micro-particle blasting technology and a fine aluminium silicate (40-90 μm) as blasting abrasive.

The Emperor William monument, which is 88 metres high, was built from 1892 to 1896 in the cyclops style of the late Wilhelminism period according to the plans of architect Bruno Schmitz. It towers above the Weser gorge of Porta Westfalica at an altitude of over 200 metres and is an important landmark in the region. Since 2008, the monument has formed part of the Road of Monuments, which combines seven of Germany's most prominent monuments. 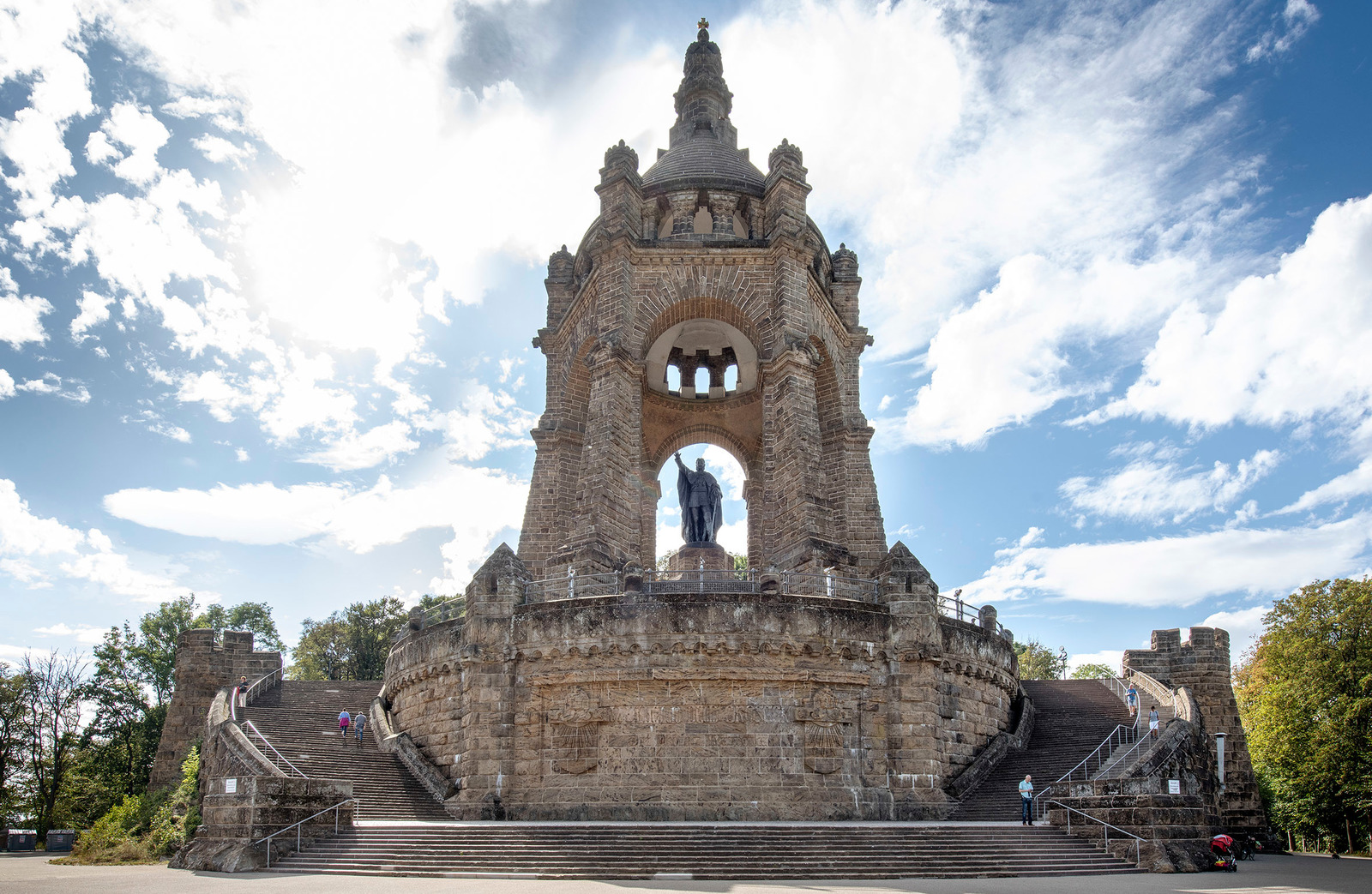 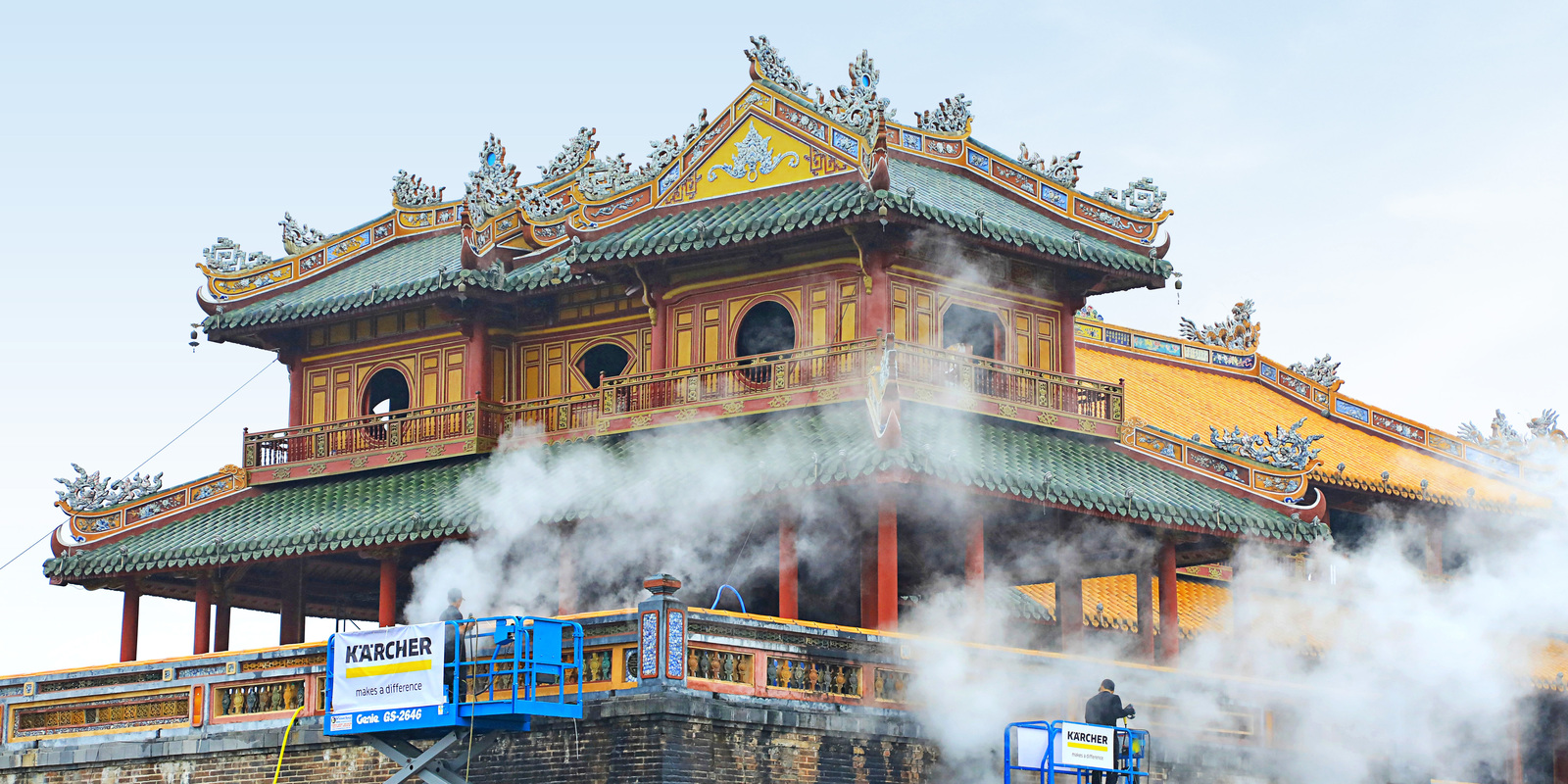 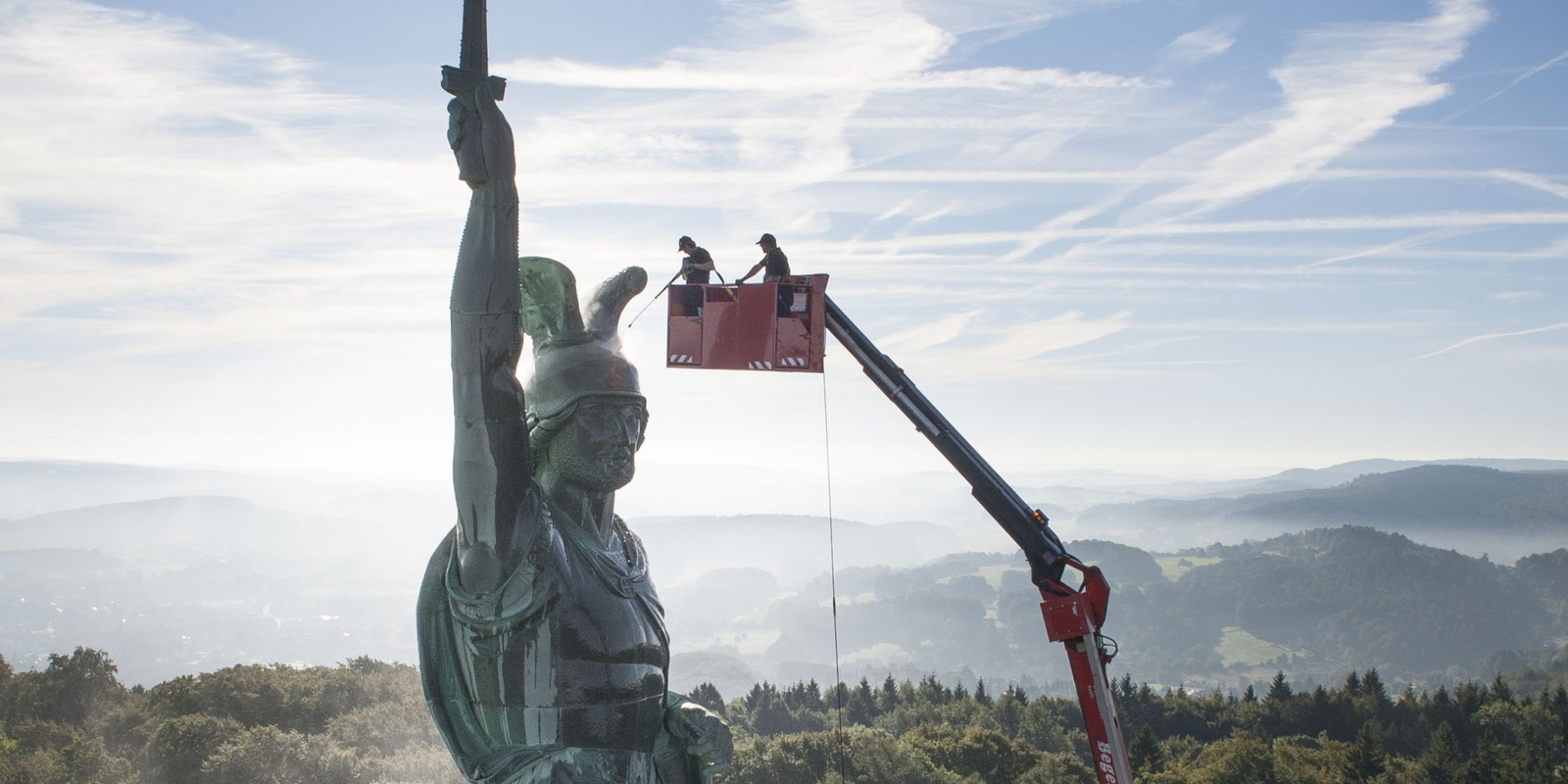 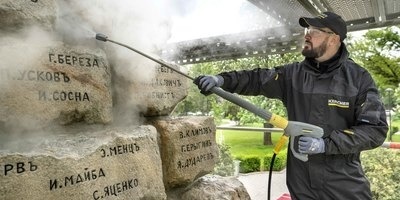