Like almost all growth in the garden, trees and bushes also require regular maintenance in order to look nice and have lots of blossoms and fruits. Cutting bushes and trees regularly sounds laborious, but is quite easy with the appropriate tool and a few tips. In order to cut trees correctly, you need a tree lopper and chain saw – ideally battery-powered – protective clothing, gloves, possibly a ladder and a schedule as to what wood is next and when.

The appropriate tool for tree cutting

A tree lopper is ideally suited to branches and limbs up to three centimetres in diameter. Battery tree loppers make work considerably easier here, as they require less force.

With thicker limbs, you'll make good headway with a chain saw. Battery chain saws are ideal for cutting trees, because they are lighter than petrol-powered saws and you are not exposed to exhaust gases when working. However, you are only allowed to use chain saws and electric saws if you can stand safely on the ground when doing so, are a trained tree climber or have a cherry picker available. 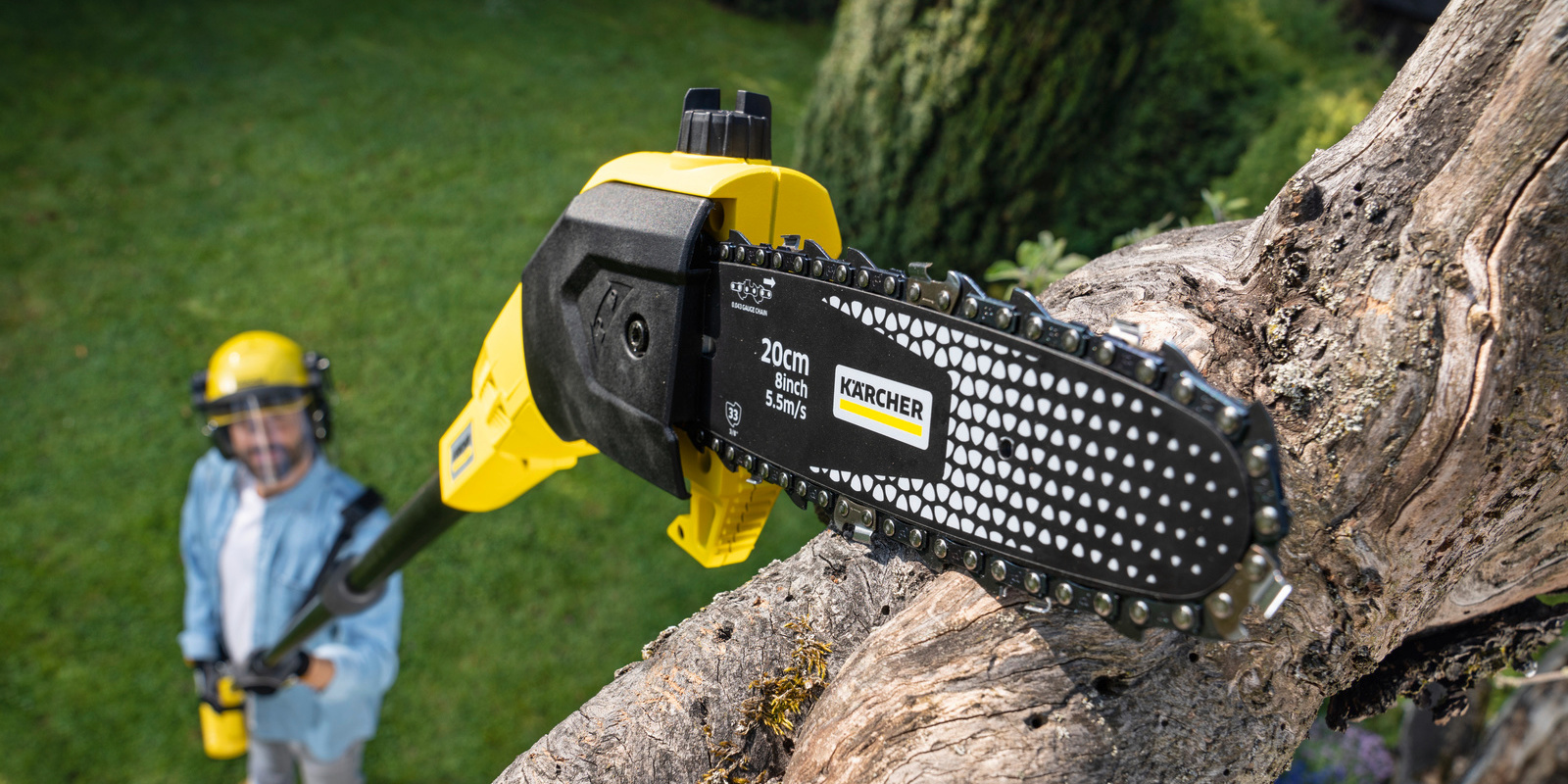 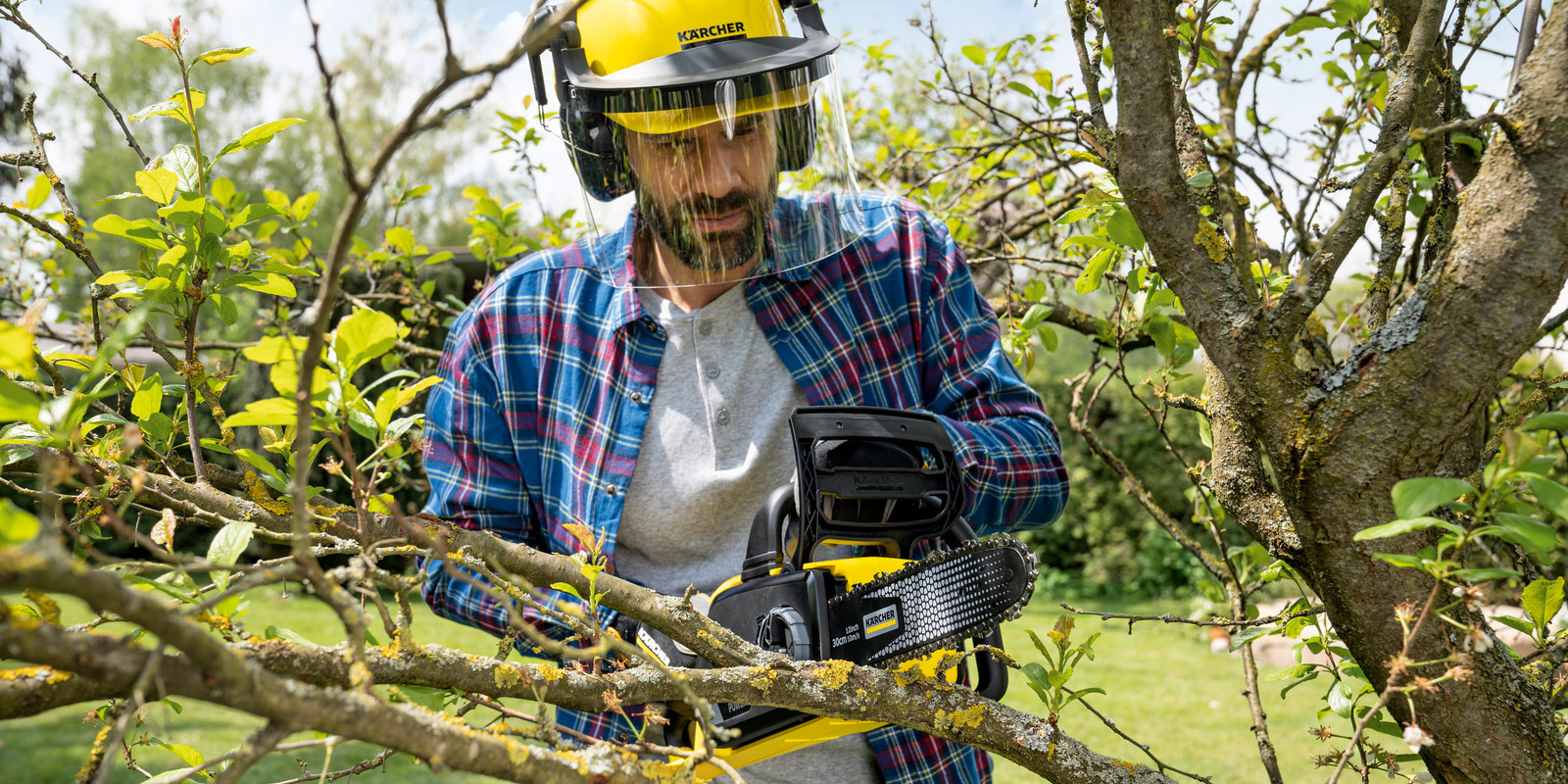 If you want to cut larger bushes and older trees, that generally means that you need an extension of the arms. A battery-powered pole saw reaches up to four metres high and, thanks to a shoulder strap, it means that even more lengthy tree cutting work isn't a problem. You can stand safely on the ground and don't need a ladder.

When cutting trees, you must always ensure that your head and hands are protected. Gloves and safety goggles to protect against wood chips are the minimum standard equipment. Anyone who has to remove larger limbs should additionally protect themselves with a helmet or at least never stand under the falling limb. 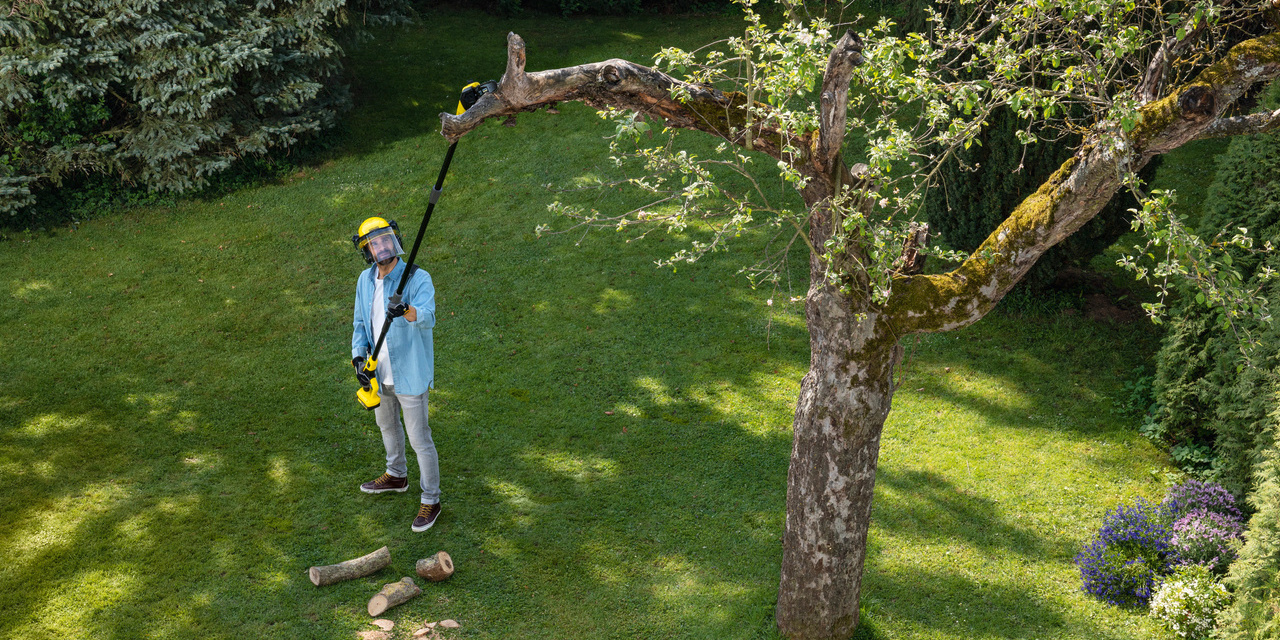 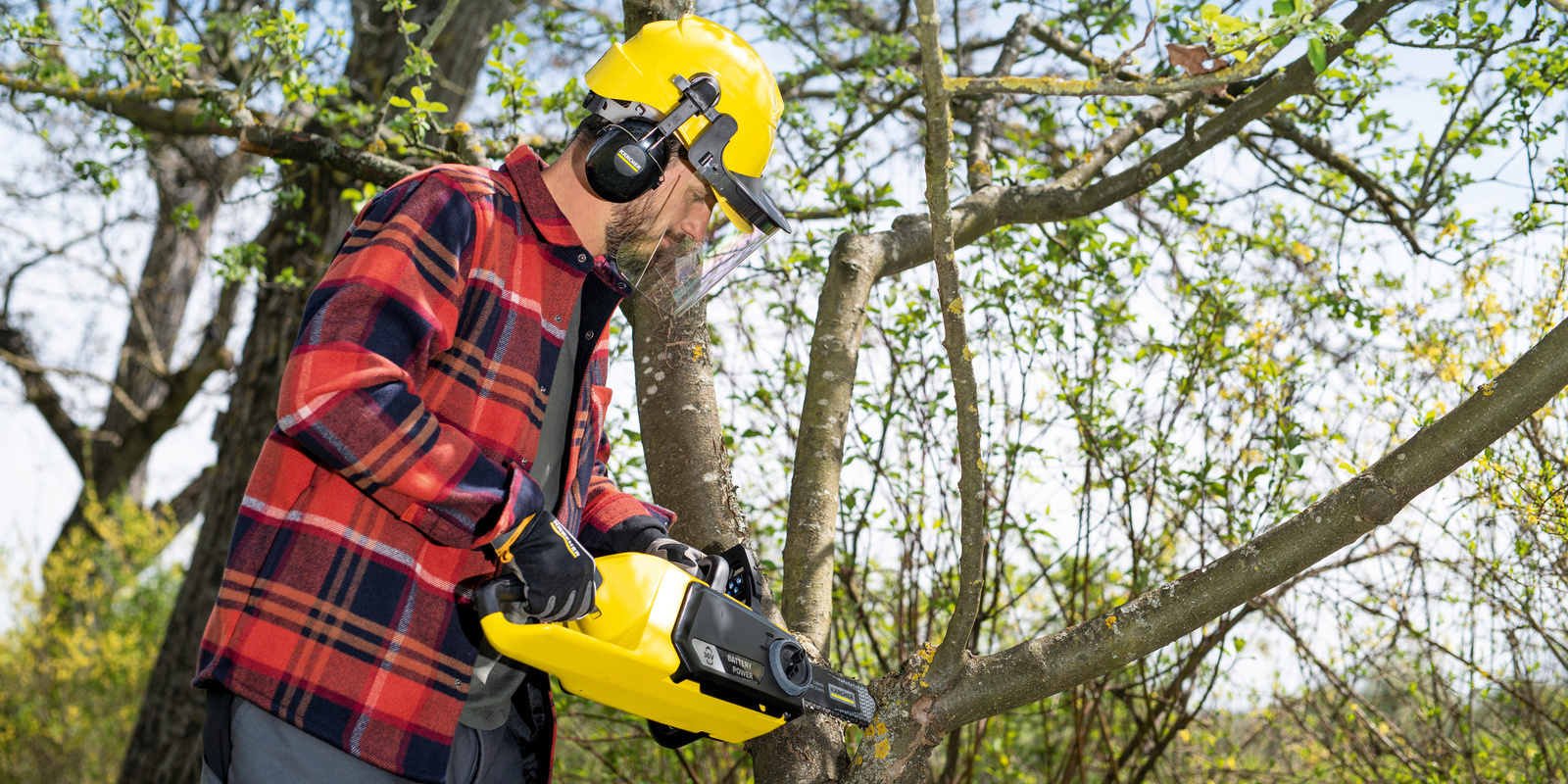 Cutting a tree: When should you do which tasks?

The right time for bush cutting and tree cutting depends on the wood and on the kind of cutting. Ornamental shrubs are generally cut every year so that they retain their desired shape. Fruit trees do not have to be cut every year, but tree maintenance should also regularly take place here every four to six years. You should cut young trees in particular in a targeted manner more frequently, in order to avoid misgrowth, for example forked trunks.

The vegetation cycle of trees and bushes must also be considered. From August, many woods pull their reserve materials from the leaves into the roots, in order to collect them for rebudding in the spring. You should therefore avoid making larger cuts between August and December for many kinds of wood.

Recommendations: What time period is suitable for what tree cutting?

But there are no general recommendations for all woods. Ideally you should find specific information yourself as to when and how you can cut which bush or tree. 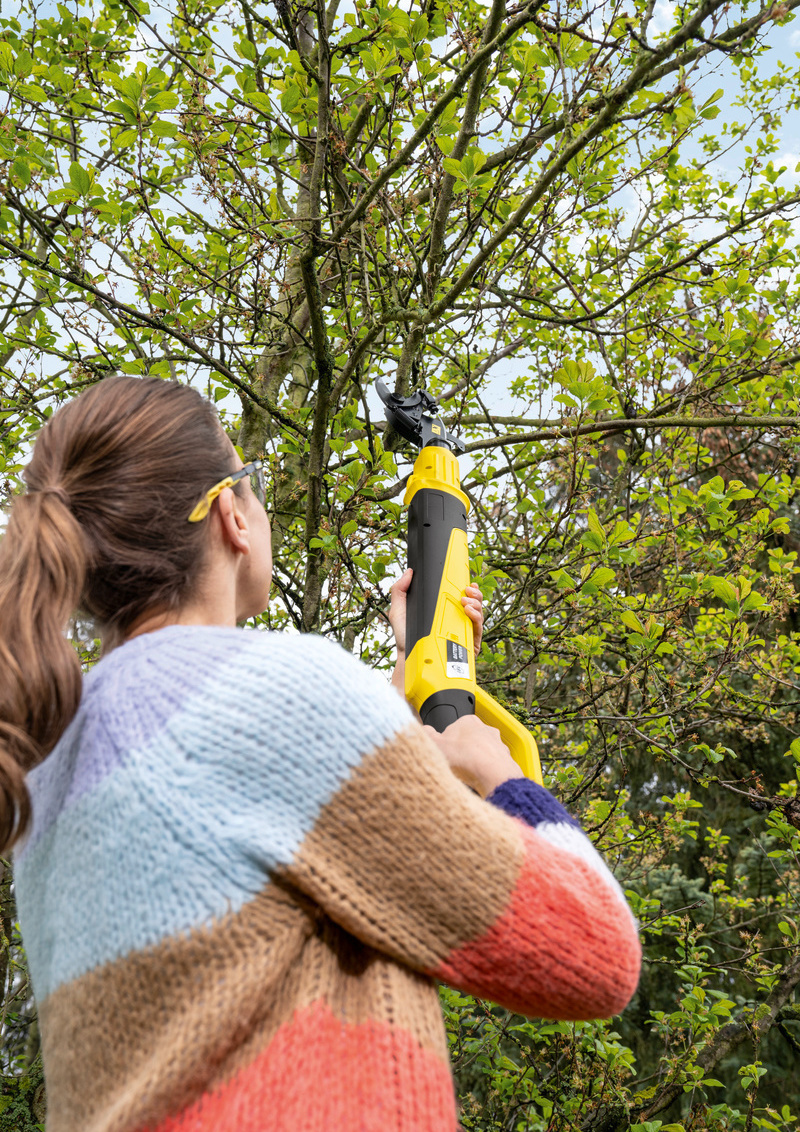 What is removed when cutting a tree?

Cutting bushes and trees means, above all, removing diseased and superfluous limbs and branches. While ornamental shrubs have to be shaped, the objectives for fruit trees are a good fruit yield and general tree health. These types of cuts are frequently differentiated: 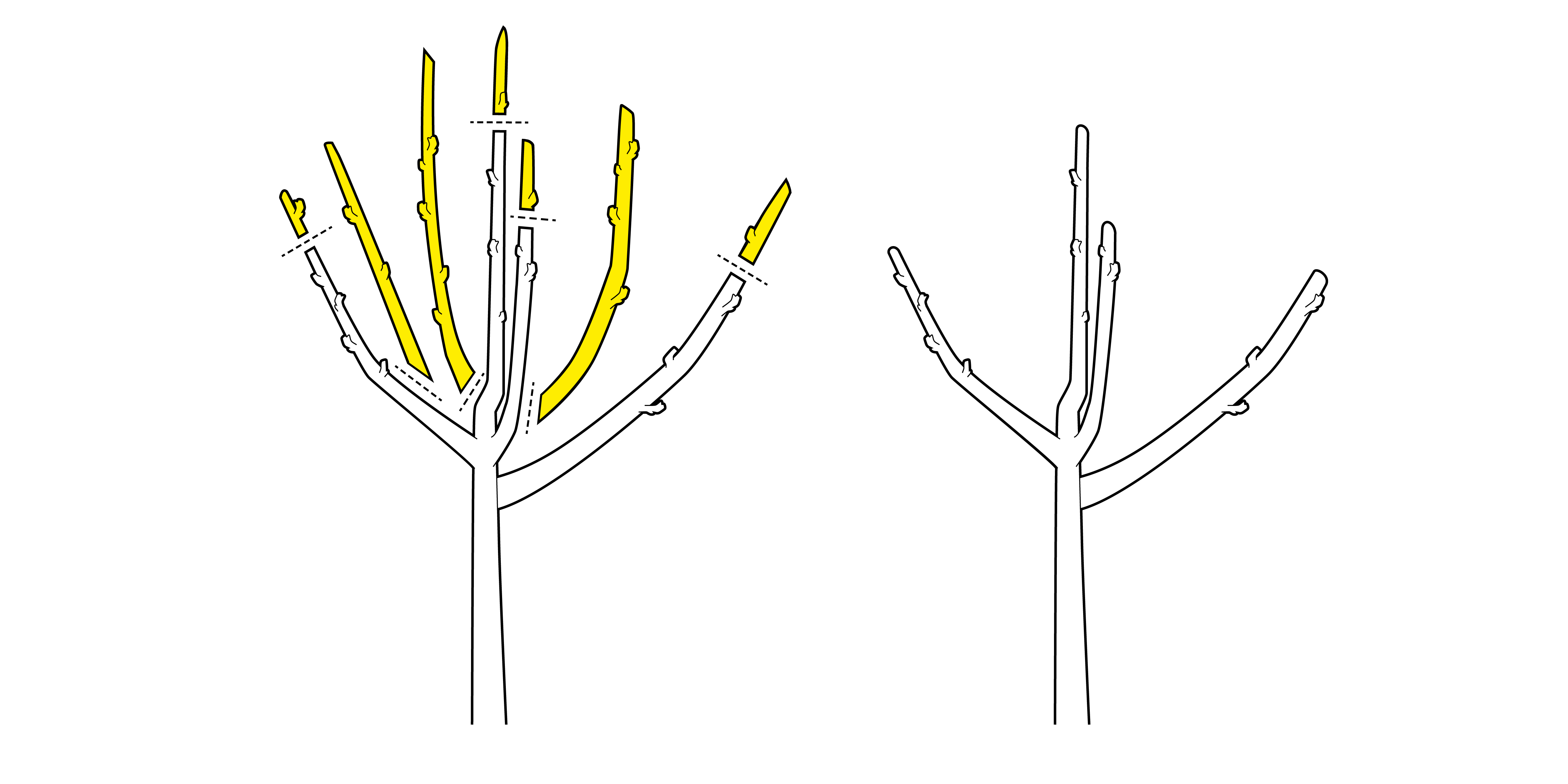 Plant cutting: In order to encourage the growth and formation of the treetop, you can cut back freshly planted trees to roughly one primary and a maximum of three secondary sprouts. 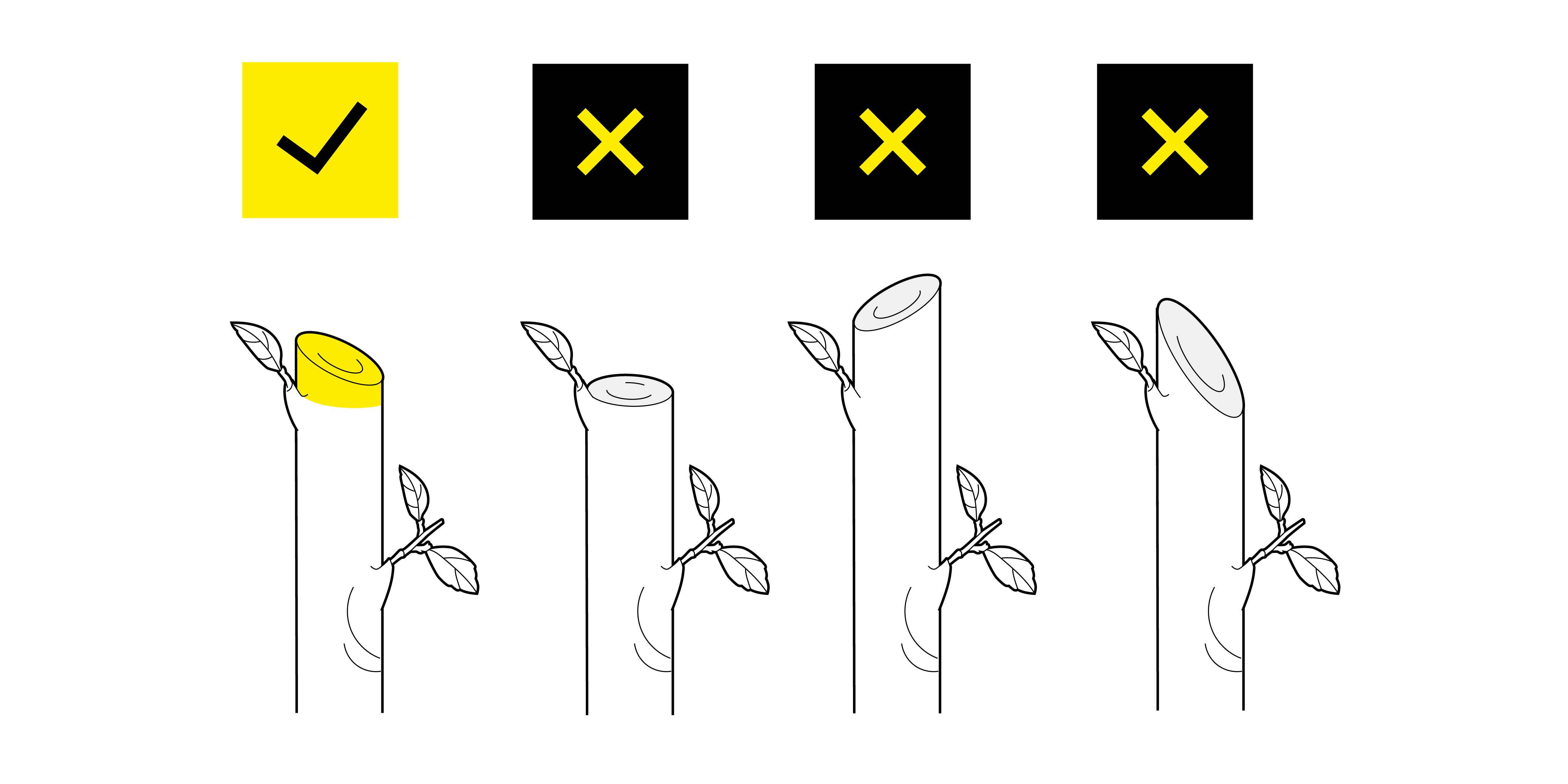 Shaping: It is generally used to cut bushes and shrubs into a shape, but also to reduce the treetop, straighten the growth and remove annoying limbs or limbs that are growing cross-wise. You can also use shaping to create space, such as by baring the trunk through trimming (removing the limbs in the trunk section). For new side sprouts, you can shorten limbs to the desired length up to the dormant side or underside buds (eyes). 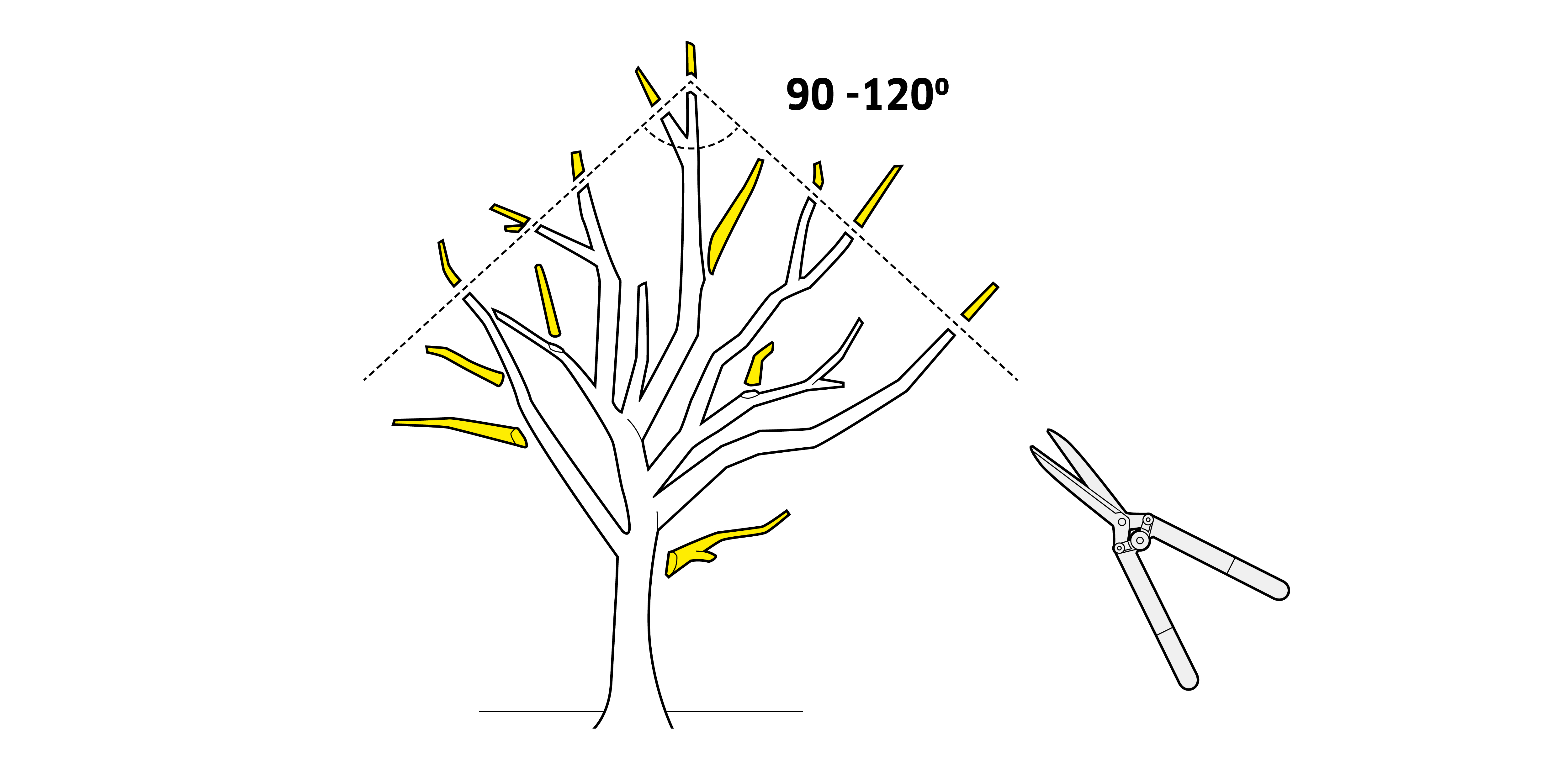 Yield cutting: For a better harvest, you should regularly cut fruit trees. When thinning the treetop, you always remove superfluous sprouts completely, so that they do not sprout again repeatedly and even more thickly. With apple trees, you cut off the branched sprouts hanging down behind a younger side sprout. 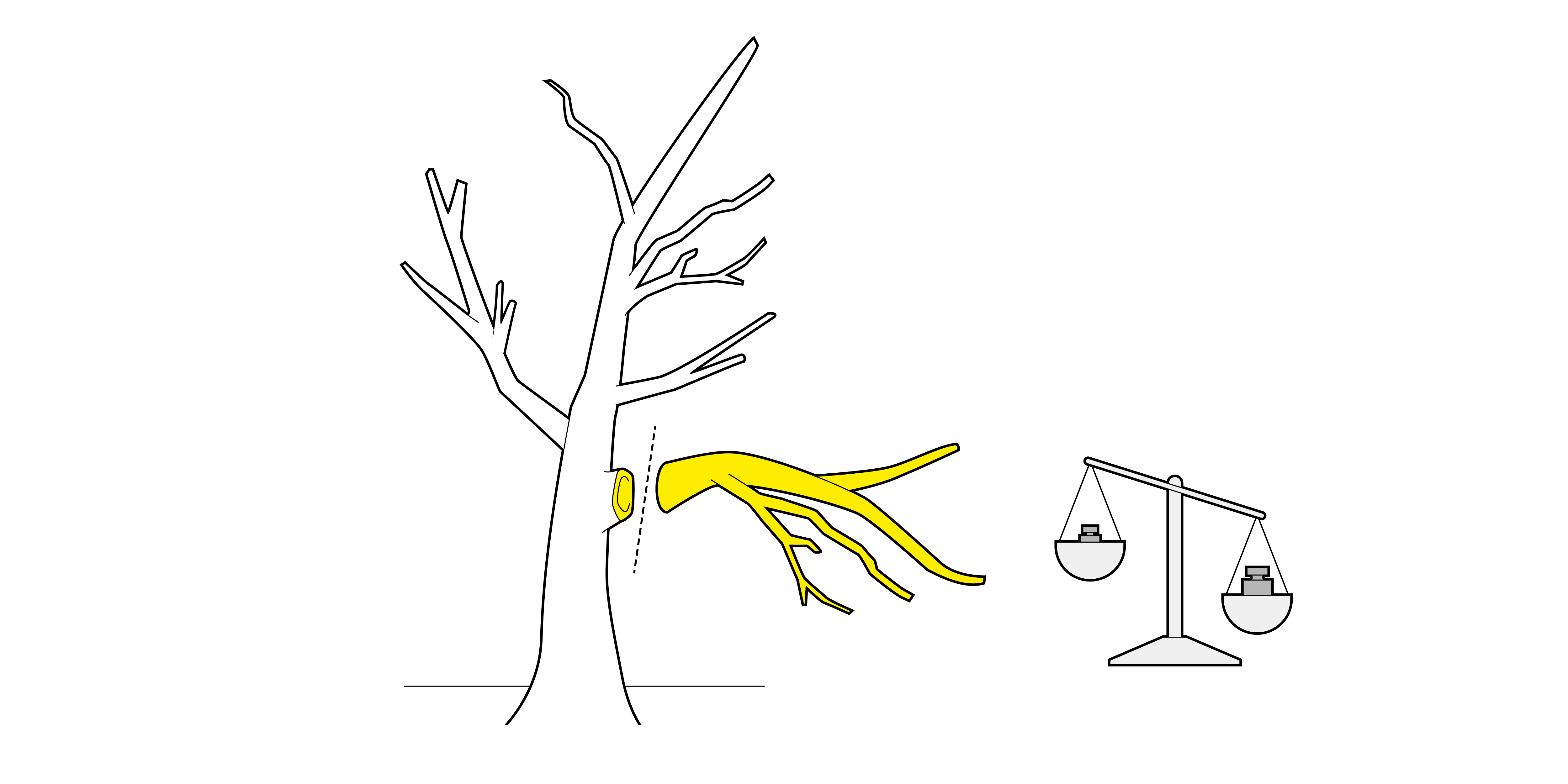 Relief cutting: Damaged branches and limbs, for example broken after a storm or snow or victims of a pest infestation, are removed. Limbs that cause an imbalance are also cut off. Especially after relief cuts, tree cutting wounds should be sealed with grafting wax or other suitable means.

Cutting bushes and trees means interfering in the balance between the mass of the roots and the treetop. The more strongly you cut back, the more strongly the plant may react with rebudding. Essentially, all diseased and superfluous limbs and branches should be removed in a cutting process. But it is only very rarely advisable to cut back a bush or tree completely. 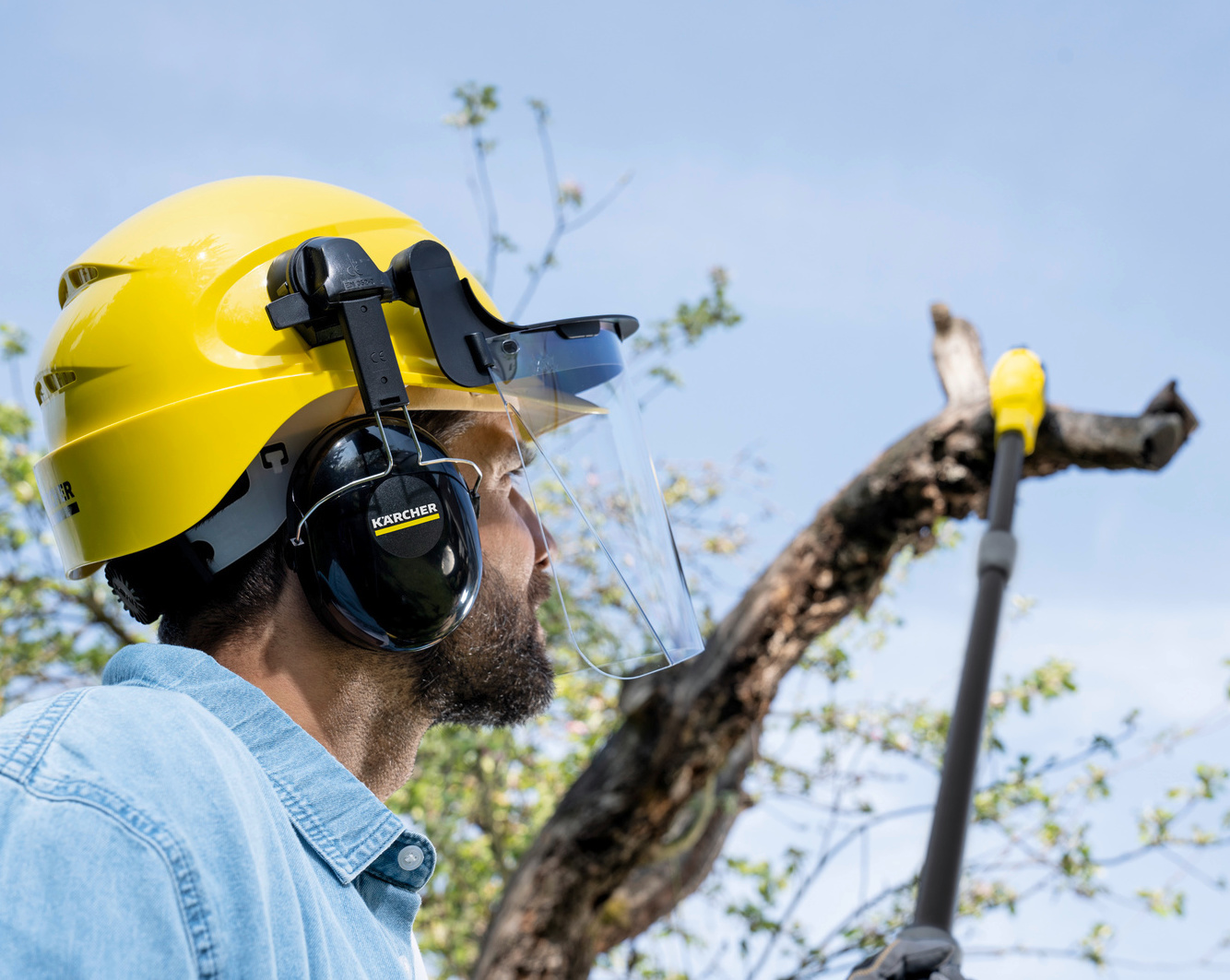 You can cut off small branches up to head height with gardening shears. A battery tree lopper is recommended for thicker branches and small limbs up to maximum three centimetres in diameter. The principle is the same – the garden shears or tree lopper is positioned close to the base of the branch or limb, so that ideally no stubs remain. This "bypass technique" is important in order to avoid dying limb stubs, which can be gateways for pests and rot.

You can cut thick limbs from bushes and trees with a chain saw. This requires a careful cutting technique so that the bark is not unnecessarily damaged.

The remaining limb stub is then cleanly cut away on the limb ring. To do so, you should ideally position the saw slightly diagonally, away from the tree trunk. The meristem tissue in the limb ring ensures that new bark grows over the cut surface. You should ideally cut off longer, large limbs bit by bit from the outside to the inside. That takes more time but is safer and has the advantage that you later have less work to do when breaking down the wood that has been cut off. Finally, cutting trees also means that you have to dispose of the wood that has been cut off.

To ensure that tree cutting also succeeds next time, you should ideally service the tree maintenance tools immediately.

Cleaning the cutting blade with a brush is sufficient for maintaining the tree lopper. The quality of the cutting blades is preserved if these are rubbed or sprayed after each use with thin machine oil or spray oil. This ensures the necessary lubrication and protection against rust. It should also be regularly checked that the screws and nuts of the tree lopper are seated firmly. Disinfecting the garden tools used after tree cutting is also recommended in order to prevent certain wood diseases being transmitted.

Maintaining the chain saw includes cleaning the chain after every use. Resin and impurities are removed with a special cleaner. The device can be cleaned when dry with a hard brush, but it is essential to remove the battery beforehand. The oil level and correct lubrication must also be checked. You should always refill with sufficient chain oil in order to extend the lifetime of the chain and device. If there is enough special chain oil in the tank, you should still monitor the dispensing of the lubricant. Either look for oil drops in a one-minute dry run with the blade pointing down over a light background, or carefully lift the chain after a dry run (Caution: Risk of injury) and test the guide rail on a thin oil film.

You must likewise check and if necessary adjust the chain tension regularly, ideally before each use – the chain must not sag. The teeth of the saw chain should be re-sharpened if necessary, as a sharp chain ensures better cuts and greater safety. A round file suitable for the chain pitch is used for this. Alternatively, you can have the chain saw sharpened by a professional. The blade of the chain saw may need to be freed from surrounding edges and checked for damage after a few working hours, and if necessary replaced. You can also have this done by professionals. 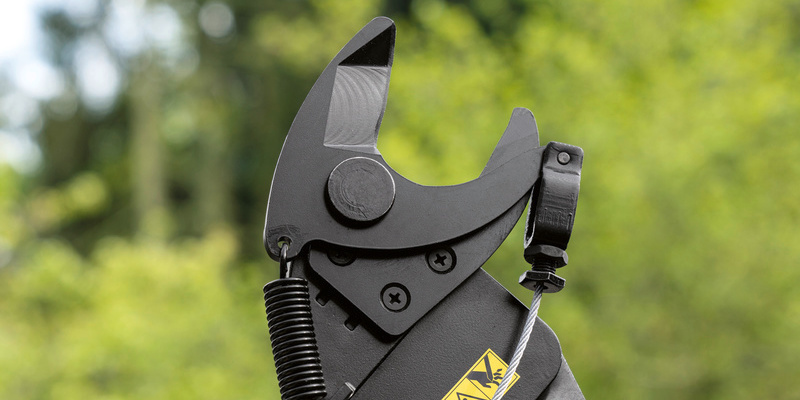 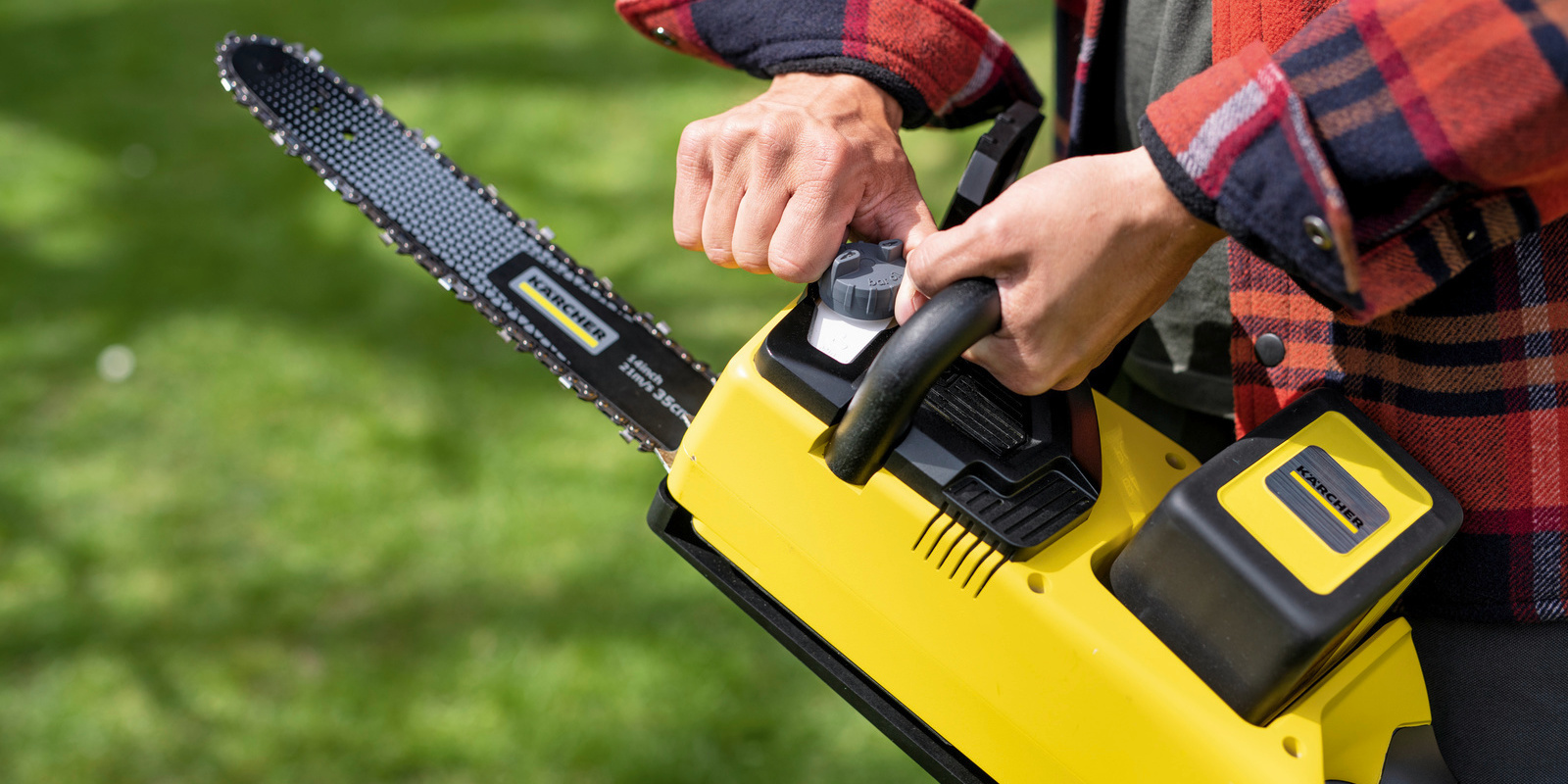 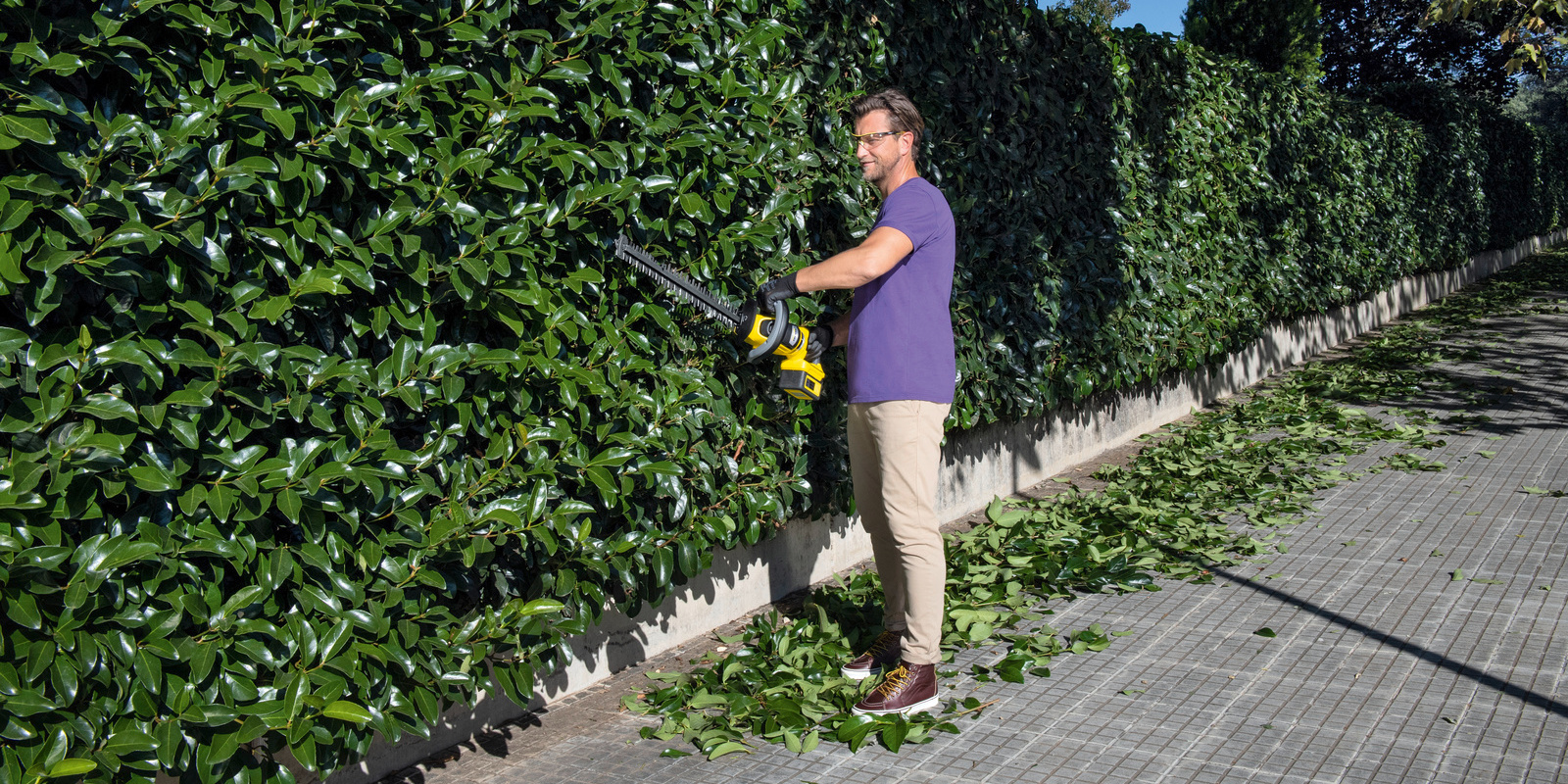 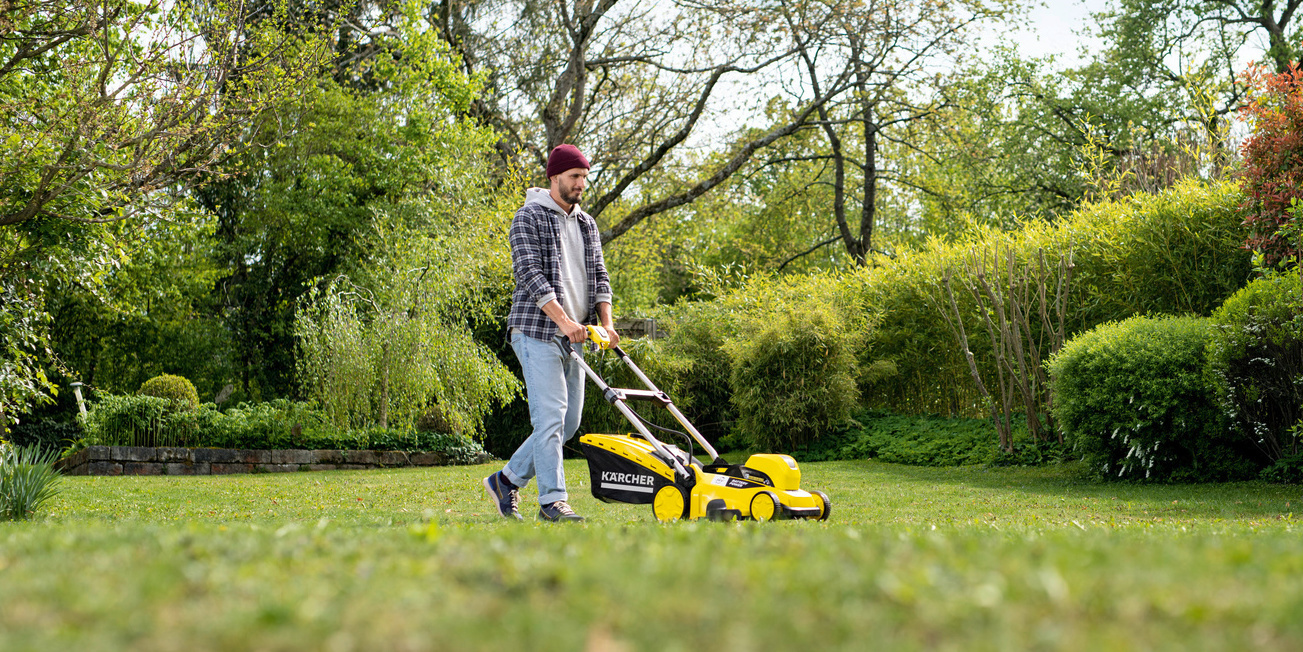 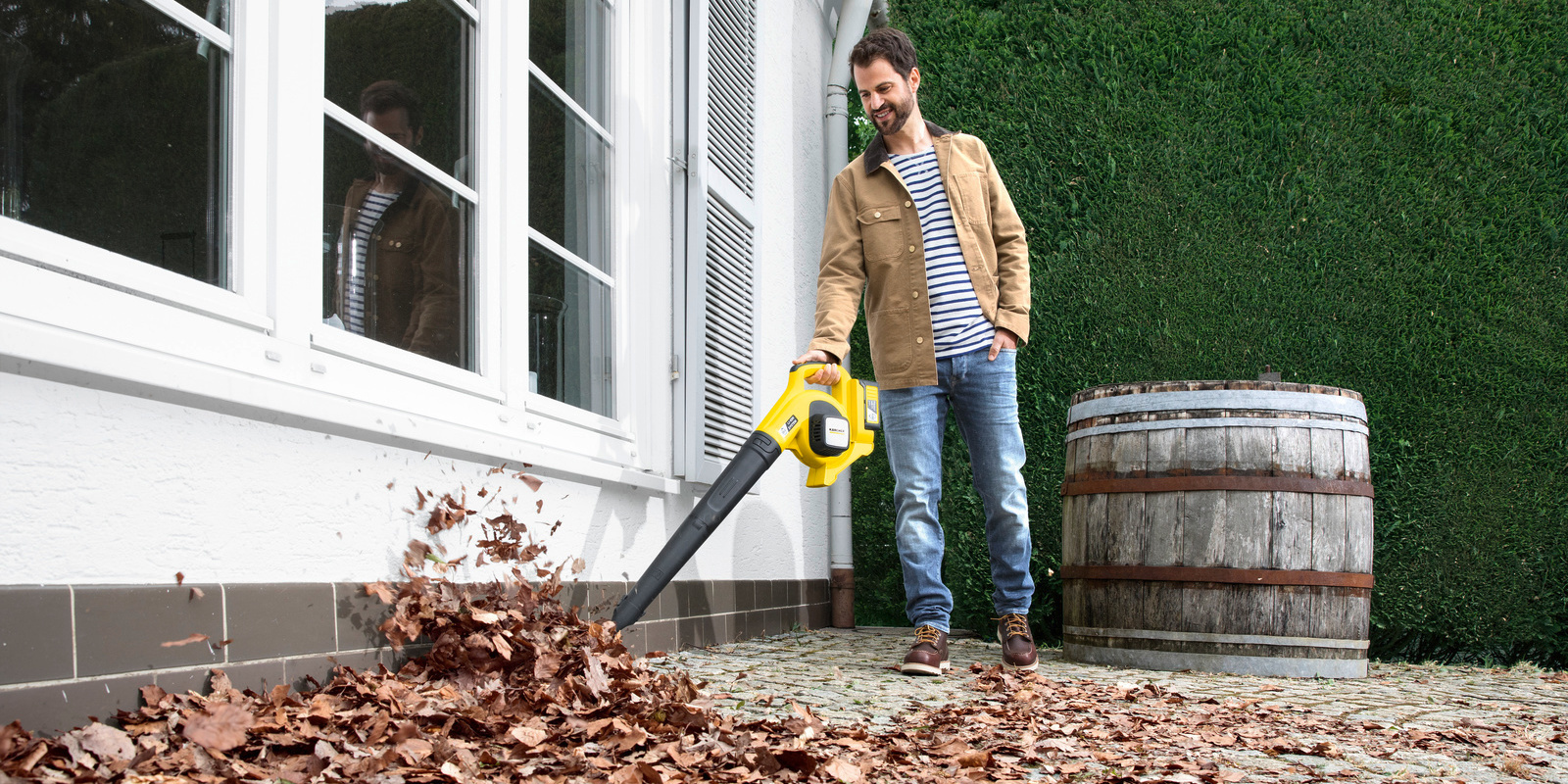